…the first touch-tone telephone was introduced. When I get frustrated with this modern world, I can usually make myself smile by imagining what text messaging would be like using a rotary dial.

It’s obvious that as I grow older I become more easily amused.

I’m not featured on the cover of the new issue of Danny Fingeroth’s Write Now! — they put Christian Bale’s picture on it instead. Probably because they wanted people to buy copies. But you will find something by me tucked away inside, lurking amidst articles by Denny O’Neil, Max Allan Collins, Brian Michael Bendis, and other luminaries. My piece talks about writing non-fiction comics, of course, and it includes a flowchart, because that’s how I think about writing sometimes.

(No kidding — I finally broke through a mental logjam regarding the plot of an upcoming book when I started approaching it as computer code. Jason Shiga would be proud.)

Updated, Nov. 14: Because of a production mixup, in the printed article it appears as if neither I nor the Write Now! editors did the appropriate research on how to spell “research.” The irony isn’t lost on us, we regret the error, and assure you that we do know how to use a dikshunairy. Here’s the flowchart, as we intended it to appear. 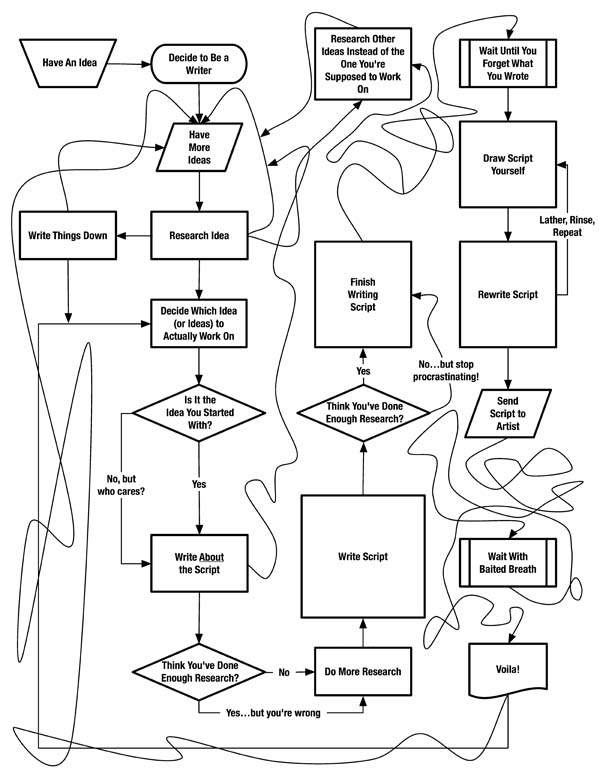 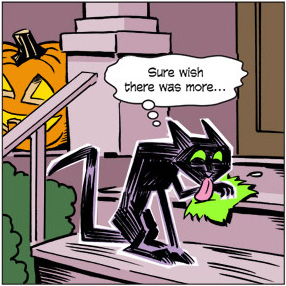 Sean Bieri and I just finished the first Better Zombies Through Physics story, and with the Blessings of Tor (sounds like something Rick Moranis might have said in Ghostbusters, but it’s much better than that) we are sending Erwin and Co. out into the wild via a Creative Commons “Attribution-Share Alike” license. You can read more about it over at Tor.com.

Here’s hoping some many of you will have some fun with the characters!

From New Scientist, this article about what we’re likely to see from the Obama administration. Also, this video, called “Blueprint for Change: Technology,” which appears to be an edited version of the Candidates@Google event held November 14, 2007.

The latter is long, and less about science and technology than I would like, but these election maps created by Mark Newman won’t take you much time to digest. I found them very heartening — the great divide is not so great when looked at in these ways.

I think this will be my last post on the election — see, I found this patch that helps ease the cravings for presidential/political news…it will probably work until at least mid-January. In the meantime, I’ll just stick to reading The Onion. (Warning: As the movie ratings people say, they use language in their reporting.)

I heard two excellent speeches last night. John
McCain’s was very
different in tone and content from what I heard in the last few months
(and I think the election would have been much closer had it been that version of McCain we saw and heard all along). Barack Obama’s was very much a continuation of the tone and
content that helped convince me to support him last December.

I think we elected the right person to lead
us. President-elect Obama has at least 8 years of bad road to repair, so I hope he got a good night’s sleep.

If you’re a citizen of the United States and registered to vote, please head out to your polling place tomorrow. To paraphrase and quote a little from the late David Foster Wallace’s superb essay (originally published by Rolling Stone in 2000) “The Weasel, Twelve Monkeys And The Shrub”, don’t kid yourself into thinking there’s such a thing as not voting.

There is no such thing as not voting:

You either vote by voting, or you vote by staying home and tacitly doubling the value of some Diehard [partisan’s] vote.

So cast your own vote, not somebody else’s.

Updated, Nov. 4: I just voted, and I hope however this turns out that, unlike the way campaigns and partisans on all sides typically conduct themselves, people will take a lesson from John Wayne. Yeah, that John Wayne. I doubt I’ll ever have the occasion to quote him again, but he said just the right thing after the 1960 presidential election. He supported Nixon but said this about Kennedy:

I didn’t vote for him, but he’s my president, and I hope he does a good job.

There’s a lot that needs doing, and fixing, in this country. So while I hope the candidate I voted for wins, whoever it is, he will be my president and I hope he does a good job.