Everybody responded differently to 2020’s awfulness, and I know many couldn’t concentrate on reading. I found that I could, and got even more comfort (and yes, escape) than usual from it.

Not counting books I read as research, I clocked in at 13 graphic novels and 80 prose works (46 fiction, 34 non). Here are my favorites, in case you need some recommendations for the coming year.

Circe by Madelaine Miller
Cities of the Plain by Cormac McCarthy
Exit West by Mohsin Hamid
The Given Day by Dennis Lehane
In the Woods by Tana French
The Necessary Beggar by Susan Palwick
The Overstory by Richard Powers
Sing, Unburied, Sing by Jesmyn Ward

Because Internet by Gretchen McCulloch
The Falcon Thief by Joshua Hammer
Human Compatible by Stuart Russell
The Library Book by Susan Orlean
Lucky Dog Lessons by Brandon McMillan
Meditations by Marcus Aurelius and Gregory Hays (trans.)
Midnight in Chernobyl by Andrew Higginbotham
Once Upon a Time I Lived on Mars by Kate Green
The Sirens of Mars by Sarah Stewart Johnson
Vesper Flights by Helen MacDonald
White Fragility by Robin DiAngelo

I also read a lot of old comic books (ostensibly because I’m weeding the collection, but in part just for fun) and, as mentioned, a bunch of books for future projects. Here’s hoping you found comfort in something this year as well, and that next year is a better one.

The bar for that is set low… 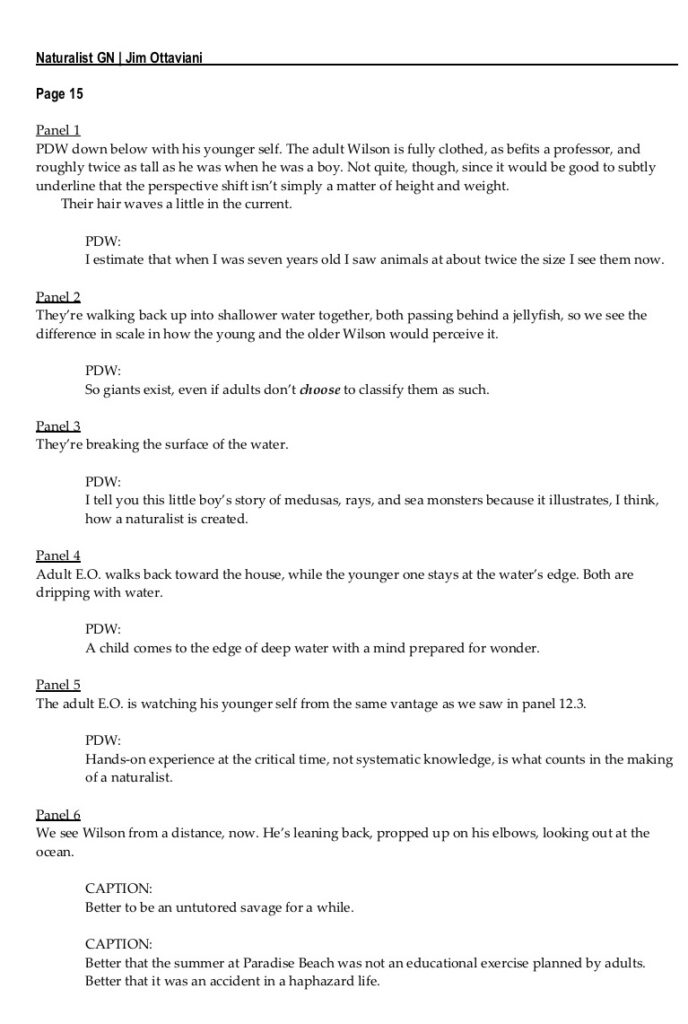 In adapting E.O. Wilson’s prose book Naturalist (available Nov. 10, but you can pre-order it now!), I finally got a chance to calculate the whole “a picture is worth [X] words” thing with some kind of precision, since this is the first adaptation of a single, complete book I’ve done. So, by the numbers…

The text that will appear on the pages of our adaptation: about 28,906 words.

That’s the upper bound — here’s why there’s almost certainly fewer words, and why I don’t know how many fewer: The total script length is 70,320 words. The difference is because most of the script is context, description, and stage direction. As any artist who’s worked with me knows, I Have Opinions on how panels, pages, two page spreads, and scenes should look, and I’m not shy about sharing them. But the final book has fewer words on the page because as the artist does their thing I can usually eliminate more words. These on-the-fly editorial decisions aren’t reflected in the final draft of the script — we make the changes based on the drawn pages, since the script is no longer the most important thing. In fact, I actively avoid looking at my panel descriptions once there’s art, and instead work to make sure the words work best with that. More often than not, the actual images work better than the fantasy images in my head. Only when an image doesn’t seem to move the story forward will I go back and see what I asked for. 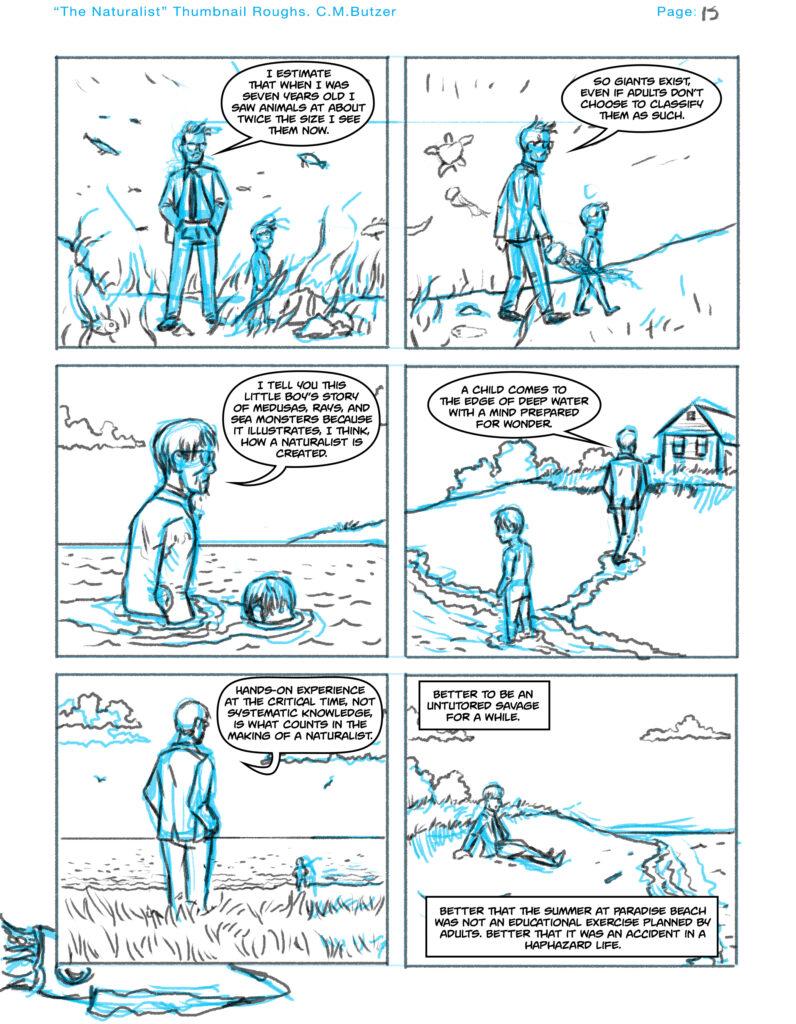 Well, not at all, really. But leaving aside this hand-wavy pseudo-proof, this much is true: Chris Butzer’s work, coupled with Hilary Sycamore’s colors, sure do a lot of heavy lifting in this book! 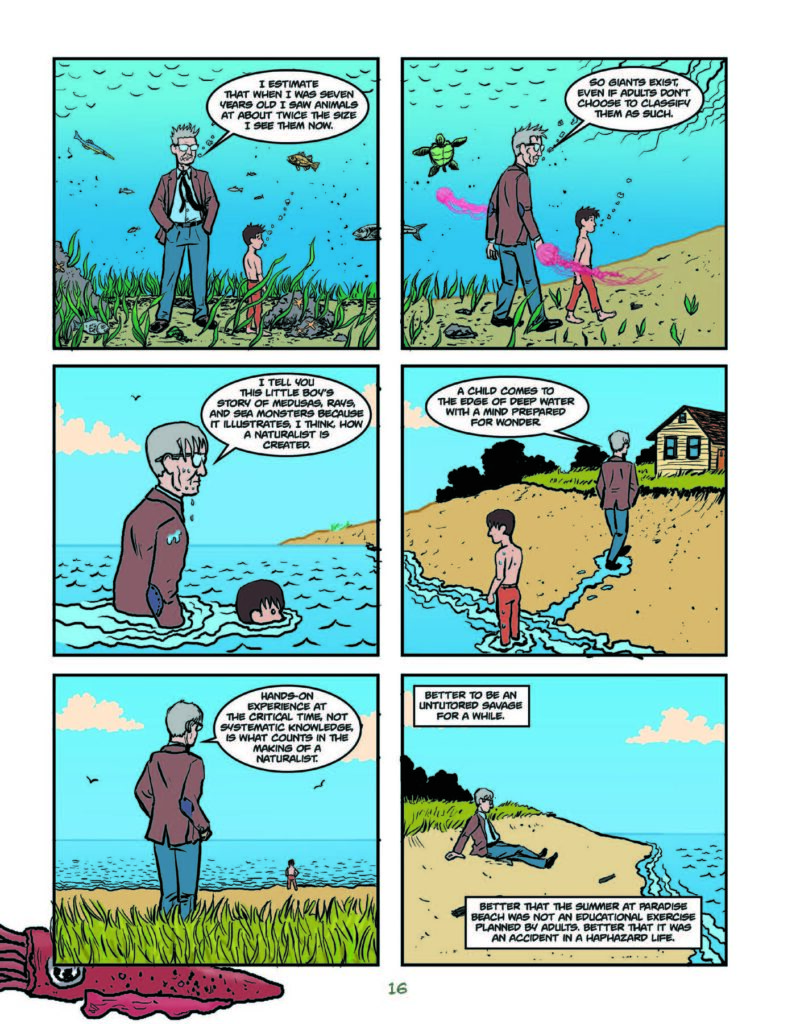 Though it’s not my book in the sense that others have been, I still feel some ownership of Naturalist (available Nov. 10, but you can pre-order it now!), so this is a thrill: 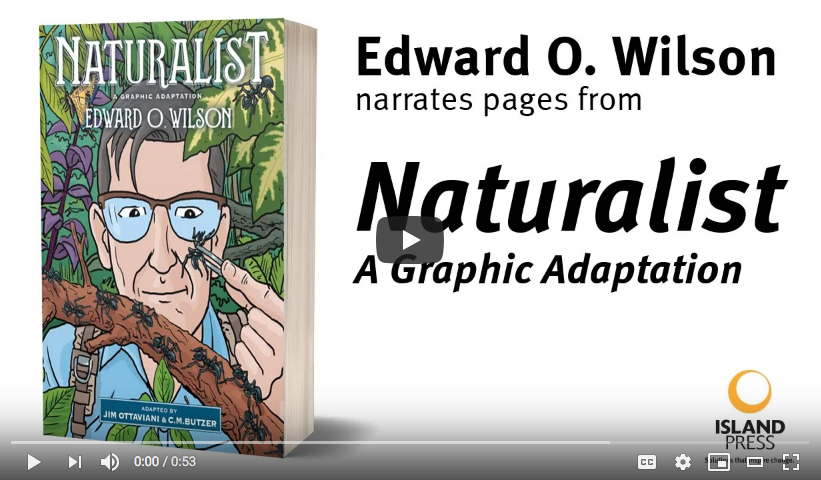 (In case clicking on the image doesn’t work for you, here’s the link to the video: https://youtu.be/StJapBmLdjE.)

My latest book isn’t mine, really.

The first name on the cover is E.O. Wilson’s, since Naturalist (on sale Nov. 10, but you can pre-order it now!), is an adaptation of his memoir of the same name. I’d never adapted a book before, and had no idea how to do such a thing when an editor at Island Press asked me to consider it. I think I came clean to Rebecca (hi Rebecca!) about this right away, but she sent me the book anyway. By the time it arrived I was having a hard time stopping myself from underlining passages in a copy I’d already borrowed from the library.

That copy she sent me is now beat up and marked up and I’ve underlined stuff on almost every page. Not surprisingly, the book is visually rich and verbally dense. It wasn’t quite a “choose your own adventure” experience, but there were many pathways through the book to explore in adapting it to comics. But to me, what happened between the lines was just as interesting, and to my mind it was this: Prof. Wilson was talking to us, sure, but he was also talking to himself.

So what does this mean for the comic? It meant, to me, that Wilson should talk to himself in the book. Obviously. But also literally. The present day Wilson — “PDW” in my script — should appear as a character during his early life, and vice versa.

I knew Chris (hi Chris!) was up to the artistic challenge of that, but I had no idea whether Rebecca would buy in, much less Prof. Wilson himself.

(Hi Prof. Wilson; I still can’t bring myself to call you Ed!)

To their credit, though they were skeptical (especially at the script stage, where the story is only words on the page, so it’s all theory…or maybe just hypothesis!) they let me proceed. And once it was reality, and they could see it in the art, they bought in completely. And that’s because comics is so good at keeping readers out of the uncanny valley.

Briefly, the uncanny valley is a phrase from the 1970s introduced by Masahiro Mori, at the time a professor at the Tokyo Institute of Technology. He used it to describe how as robots appear more human-like, they become more appealing — but only up to a point. When they get close to human-like, but not close enough, they start to look creepy. That’s when they’re in the valley. There are lots of reasons why 3D animators (think Pixar movies) don’t try to make their characters resemble real humans or animals too perfectly. One of the main ones is they don’t want to trap them, and then the audience, in the uncanny valley.

The comics medium has an advantage here, I think. A somewhat cartoony style, which I prefer over hyper-realistic ones, makes falling into the uncanny valley almost impossible. For one thing, the first image you see of a character fixes the look of that person in your mind, at least in the context of the book. It becomes the baseline for what you expect to see.

That’s not much different from movies, of course, so the real difference is that in comics you’re a reader, not a viewer. And as a reader, you fill in more details — and all the movement and humanity — that happens between the panels. The subtle failures in how light plays over real flesh, or wind moves hair, or the dissonance of hearing a famous actor’s voice coming out of someone else’s mouth? Those can’t happen in comics.

There are valleys and mountains and amazing vistas and wonderful animals of all kinds in our book, of course. It’s about Nature-with-a-capital-N, after all. But I can say that if you agree to accept that first image of E.O. Wilson as The Naturalist, you can trust him, and us, to move you through both space and time and never even approach the uncanny. What you’ll get instead is the wonder and joy of discovery.

That’s definitely not a title built for SEO, but hey, it’s accurate. And we’re all about precision and accuracy here at G.T. Labs. 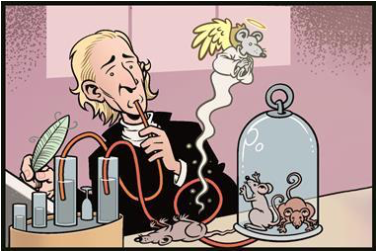 2019 was the International Year of the Periodical Table, and to celebrate—you know, in addition to taking part in the usual exchange of Mendeleev-themed greeting cards and transuranic chocolates—you could stop on by the Royal Society of Chemistry’s site and read comics. That’s right, comics invaded Chemistry World, and I wrote ’em. The first few are drawn by Roger Langridge, who I’ve always been a fan of and whose work on these (mostly) true stories is even more remarkable than you must expect of me to tell you how. (To paraphrase the Messenger in Much Ado About Nothing, since I feel like my part in all this is mostly as a means to introduce scientists to great artists.)