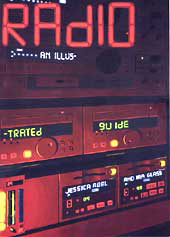 Comics are a silent medium, so sound and music, however hinted at by a comic book artist, don’t sing on the page. (Though some artists, including Mark Badger, Megan Kelso, Dave McKean, and Paul Pope, manage to at least suggest music well). That means when this week’s thug connects with the Spirit’s jaw we may feel the impact but we don’t hear it, and we can only imagine what Hopey Glass’s band sounds like.

“[T]he thing is, radio is a very visual medium”. So says Ira Glass, host of NPR’s This American Life, talking with Jessica Abel about making radio that’s good. (Jessica’s original title page said “How to make radio that’s actually good”, but Glass thought that obnoxious.) The quote shows up on page eleven of this excellent thirty page comic, and by the time you reach it you won’t agree with her initial response: “That’s sorta counterintuitive.” Yes, on the surface it’s counterintuitive, but only to the degree that a comic book about creating radio interviews can be this good is counterintuitive. It is, until you’ve seen it done. Abel applies a variety of formal techniques and sure-footed pacing to this unusual subject. The result was hands-down my favorite single issue comic book from 1999. That I’m a hopeless NPR addict might bias me, but I don’t think so, since I still look at the book regularly.

To sum up why, let’s skip to the last page, where Glass tells Abel: “The key to the whole thing isn’t structure. In fact, the simpler the structure the more space you have to follow your curiosity, to work in the movements and quotes that give you pleasure, or evoke some feeling in you, or amuse you.” Combined with the other major point Glass and Abel hammer home, it sums up why the book succeeds. That other point is that effective storytelling preserves the rhythm and structure (and not just, or even necessarily, the words) of natural speech, and maps that rhythm and structure onto the narrative as a whole. Sentence-breath-sentence. Anecdote-reflection-anecdote. It’s what makes radio stories work, and Abel captures this on both a micro- and a macro- level in the comic.

On the micro-level, Abel knows when to let a picture do the work, giving the reader and her narrative time to breathe on the page. There’s not a single panel in the book that doesn’t incorporate text, and most of them have a lot of text. (Example: The long quote about structure above is only half of the dialogue in the panel, and that’s typical of the whole book.) But in many cases that text functions more as symbols — or background music — than as words, and in doing so promotes to the picture without commanding attention to itself.

On the macro-level — that is, within a page or scene — the book as a whole meshes story (the making of a particular show called “Do-Gooders”) with how-to instruction in much the same way. The comic begins anecdotally, at 31 minutes to air with the producers glancing nervously at the clock while Glass works out the timing of his intro. From there it cuts to a segment called “Where do stories come from?”, which describes how a theme-based radio show gets pulled together over the course of many months. Abel then cuts over to an illustrated example of a story the show ran years before and we come ’round to an anecdote again. But within that anecdote, we get interrupted by an iconically drawn Glass who stops the narrative to talk about why a seemingly banal beginning to a story (“a guy sees another guy on a subway platform”) can hold a listener’s attention and how, if done correctly, the storyteller makes us want to find out what happens next.

So what happens next? In the comic, we return to the subway story (anecdote), followed by a depiction of Glass talking about the structure of the story itself and reflecting on the anecdote-reflection-anecdote structure. And then the cycle begins again. If all of this sounds awkward and formal, blame my inability to describe in words alone what Abel does by combining words and pictures.

Speaking of pictures, Abel uses some subtle (and not-so-subtle) tricks that only work in comics to pull things together and maintain the story’s flow. When she depicts Glass stepping outside of the narrative to comment on technique, she does so iconically. Characters look back and down at preceding panels to comment on their contents, panels repeat, their borders get different weights or disappear altogether, and typeset text mingles with hand lettering. All of these elements combine to good effect and make the book lively and engaging, even though this may be the wordiest thirty pages of comics I’ve read. My guess is that Radio clocks in at roughly 10,000 words, making it the densest and most prose-reliant single issue since Shane Simmons’ Longshot Comics. Abel makes it work, though, and does so while dealing with topics as diverse as the art of interviewing, logging transcripts, selecting equipment and settings, cutting/editing tape, getting started in public radio, and how best to incorporate music into a narrative.

She tells the story, too, integrating it so neatly that you’ll find yourself almost hearing the show in question while you learn how it got made. Not quite — comics are a silent medium, after all. But don’t worry, the end matter and credits include information on how to get a copy of the “Do-Gooders.” And that you get to donate to This American Life to get your own copy of Radio: An Illustrated Guide (it’s not available in stores) is a bonus.