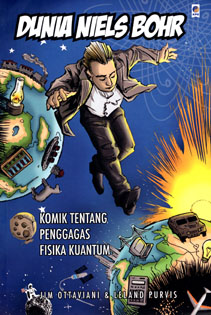 As a comics writer, with every new book I get the pleasure of rediscovering a story through the eyes and skilled hands of artists. I don’t think I’ll ever get used to the thrill of seeing a script come to life in ways that I’d imagined…and even better, in ways that I didn’t imagine.

A new thrill has come my way in the past couple of years — editions in other languages, for non-U.S. audiences. So far, only Suspended in Language has made it overseas, but a couple more will appear in the coming years. I can’t read ’em, but I sure do like looking at ’em! So over to the right you see the cover of the Indonesian edition, copies of which just arrived in the mail today, and here’s the machine-translated ad copy for the Italian edition, courtesy of Sironi Editore:

More or less all you have felt to speak, to the times of the school, the atom of Bohr. But you knew it that, during the war, its inventor risked the life traversando the Sleeve hidden in the space bombs to an airplane? Reading this comic strip you will understand that the life of a theoretical physicist can be much enlivened, above all if that physicist is Niels Bohr: not only the father of the quantistica mechanics, but one between the more important figures of XX the century. You will discover, as an example, that it helped Firm to scappare from Italy, than as well as the nazis how much the Soviet ones wanted rapirlo, that Churchill considered it the more dangerous man in the group that she constructed the atomic bomb. You will see to battle with those cocciuto of Einstein, to taken with that impertinente of Heisenberg and that maleducato one of Pauli… You will have the vertigos – because it cannot be spoken about quantistica mechanics without to have them – but you will make also a bag of risate: after all, the “spirit of Copenaghen” was also this. Final designs of Jay Hosler, Steve Leialoha, Linda Medley and Jeff Parker. Jim Ottaviani has felt to name Bohr for before the time when it studied in order to become engineer nuclear. Now ago the librarian in a university and when the others sleep, writes. He is author of many comic strips with scientists like protagonists. A dazzling thought is the first one translate in Italian. Leland Purvis, graduated in History, is a narrator and an artist self-taught. It has begun publishing in just the story anthology to Vòx comic strips, for which the Xeric has won Grant. The history to comic strips of its Pubo personage have been ripubblicate recently like series from Dark Horse Comics.