A review of our Feynman book appears in the current issue of The New York Review of Books.*

That this exists at all is wonderful in and of itself. What makes it more wonderful is that it’s a positive review, made apparently without reservation by its writer, who said (among other things that made me blush): “These images capture with remarkable sensitivity the essence of Feynman’s character.” and “The Ottaviani-Myrick book is the best example of this genre [graphic novels] that I have yet seen.”

But what blew the top of my head clean off is what you already figured out by looking at the cover…the reviewer is Freeman Dyson. If you don’t know who that is you can look him up now, or better still pick up a copy of his book Disturbing the Universe and dig in. Because even though he appears in our book too, you shouldn’t wait until August to read more about him.

* Note that I don’t think you can read all of the article for free online unless you subscribe (or are at a library that subscribes) to the NYRB.

Up here above the 42nd parallel the weather is such that I’m staying
inside and reading more, and you might also plan to spend extra time
indoors in the next few weeks. Or months. So as a public service, here
are the best books-without-many-pictures I read in 2010, complete with my
brief notes to myself about them. They’re in no particular order;
they’re all good and some are even better than that. I hope you find
something here that you like!

The Blind Side
Lewis, Michael
I wouldn’t have guessed I could be gripped by the evolution of pass rushing in the NFL, or yet another story of a kid rescued from poverty and unrealized potential. But I was. Lewis is a great writer. (I read others by him this year, and they’re all good, but this is my favorite.)

Team of Rivals
Goodwin, Doris Kearns
Fantastic account of Lincoln’s presidency and how he made it work. Worshipful at times (Lincoln never makes a mistake that lasts longer than a paragraph, often not even a couple of sentences…suspending habeus corpus at the very least should merit more), but convincing in describing his genius. Civil War history could be taught out of this book to give a balanced and exciting picture of what was at stake, what was done (and compromised; Lincoln’s caginess about emancipation is enlightening), and what was said. It would engage everyone in a classroom.

Packing for Mars
Roach, Mary
Breezy and fun and a great closing statement. I’m a sucker for the subject matter, sure, but this is terrific even if you aren’t. She’s a great writer.

Seven Days in the Art World
Thornton, Sarah
A peek into the world of high/fine art. Fascinating (there are still some new ideas — Takashi Murakami is commercial but fun and interesting) and depressing (ugly commercialism and posturing are rampant) at the same time.

Plainsong
Haruf, Kent
Spare and understated, the mood and emotions of the story creep in as you read it. I can barely describe any of the characters physically, but they’re all believable and feel real.

The Night Gardener
Pelecanos, George
Tightly woven and tautly written. You can see where The Wire comes from.

Mystic River
Lehane, Dennis
The journey is its own reward, since the writing is so good. But the ending is even more amazing. Apparently this was a movie, and it couldn’t have been very good — or had to be a different story with the same name — because the depth of characterization here would be almost impossible to achieve in less than a 12 part miniseries with writing and performances on par with The Wire. (Which Lehane wrote for. Yes, I think that show is brilliant.)

Feed
Anderson, M.T.
Very good, and grim, dystopian future. The progress of the characters was predictable to some extent, but the book was well-crafted and tight — the subtle hints about the world itself added to the realism, as Anderson left just enough to the reader’s imagination.

The Wee Free Men
Pratchett, Terry
Great kids book, with an interesting cast, clever dialogue, and a plucky heroine who’s just right. I fear the next books might break the spell, but I’ll read them anyway.

The Line Between
Beagle, Peter S.
I enjoyed this very much, with the possible exception of the last story, which was slightly (though only just) less interesting than the others to me. “Two Hearts” was fantastic, even though I’d not yet read The Last Unicorn. (Which I then did, and enjoyed.)

A Slight Trick of the Mind
Cullin, Mitch
A sad novel of Sherlock Holmes’ later years as his mind begins to fail him. Moody and evocative and emotional, it’s an unexpected look at lost love and opportunity.

The Life and Times of the Thunderbolt Kid
Bryson, Bill
Charming reminiscence of growing up in 1950s Des Moines. It’s hard to believe that all the things he said and did happened to him, but even if they didn’t, in just the manner he describes, he had a wonderful childhood and knows how to tell his own story.

Up here above the 42nd parallel the weather is such that I’m staying inside and reading more, and you might also plan to spend extra time indoors in the next few weeks. Or months. So as a public service, here are the best graphic novels I’ve read (so far) in 2010, complete with my brief notes to myself about them. They’re in no particular order; they’re all good and some are even better than that. I hope you find something here that you like!

Moving Pictures
Immonen, Kathryn; Immonen, Stuart
Strong and moody, with a particularly solid middle section (where many books, including mine…I think, sometimes, maybe…sag). The art is terrific, displaying Stuart I’s versatility and composition. I’d be curious to see the script for this as well, since there’s a lot of subtlety in staging and pacing here.

Mysterius the Unfathomable
Parker, Jeff; Fowler, Tom
A lot of fun, and the art is terrific. I want this to be a series.

Trickster: Native American Tales
Dembicki, Matt (ed.)
Mixed, as with all anthologies, but most of the stories are very good.

Scott Pilgrim’s Finest Hour
O’Malley, Bryan Lee
How about that — a satisfying ending. Hard to do with a series like this, but done and done well! I re-read the whole thing before getting to the last volume, and had a ball. (p.s. The movie was good too, but not as good.)

George Sprott
Seth
Melancholy and regret as beauty. Wonderfully put together and presented.

The Outfit
Cooke, Darwyn
Better than The Hunter, and more inventive as well. The style is full of, well, style and the art and editing are a great match Stark’s/Westlake’s prose.

Smile
Telgemeier, Raina
Charming, and spot on for its demographic. And for me as well, it turns out.

Mercury
Larson, Hope
Very strong and evocative. The cartooning and storytelling are so strong that they carried me through some parts that seemed predictable. (Here again, I’m not the book’s demographic, so that predictability is probably just fine in context.)

Twin Spica
Yaginuma, Kou
Surprising! I liked this a lot; a nifty little fantasy about a girl who aspires to space travel, presented with more depth and promise than I expected. I look forward to the next volumes.

Cul de Sac Golden Treasury: A Keepsake Garland of Classics
Thompson, Richard
The title is tongue-in-cheek and also true. The best daily strip out there.

I just saw the movie. (Thanks to 826Michigan.) You should too.

Wow. I couldn’t be happier* with this review in the New York Times. I’m told that T-Minus is also an Editor’s Choice for the week, which is also wonderful.

(*I’m even happy that the reviewer found an error. Not that I’m happy about the mistake…I groaned when I confirmed it, but deep down I knew that even though we checked the manuscript about three zillion times, a few would escape our dragnet. So I compliment his eagle-eye: In the margin of page 53 I have Friendship 7
launching in 1961. We got it right with the “T-Minus 7 years, 5 months”
caption on the same page, but somehow I messed up in the lower right
corner. It should say “20 Feb 1962” down there. So…apologies to John
Glenn, thanks to Jack Shafer for pointing it out, and I’ll do my best to get it fixed in the next printing!)

I just got back from Heroes Convention, where I hobnobbed with my betters, met many excellent people, and enjoyed myself from beginning to end. Thanks Dustin! Thanks Shelton!

The only fly in the ointment, missing piece, exception that tested the rule of excellence, etc. etc. was the absence of this book and its creators: 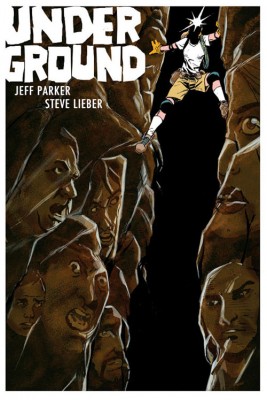 Understandable, since it’s not out yet, but still.

But. All is not lost! You can find out more about the book at the Underground site and you can place your order for it right now. It’s by Jeff Parker and Steve Lieber. There, see, I saved you a mouse-click — with those two involved you know you’ll like it and re-read it until the cover falls off. But click anyway, enjoy the very generous preview, and order one for the home and one for the office.

I remember when this book was just a twinkle in Steve’s eye, and then when that twinkle appeared in his other eye too, and one of Jeff’s. I can’t wait to get my hands on it.