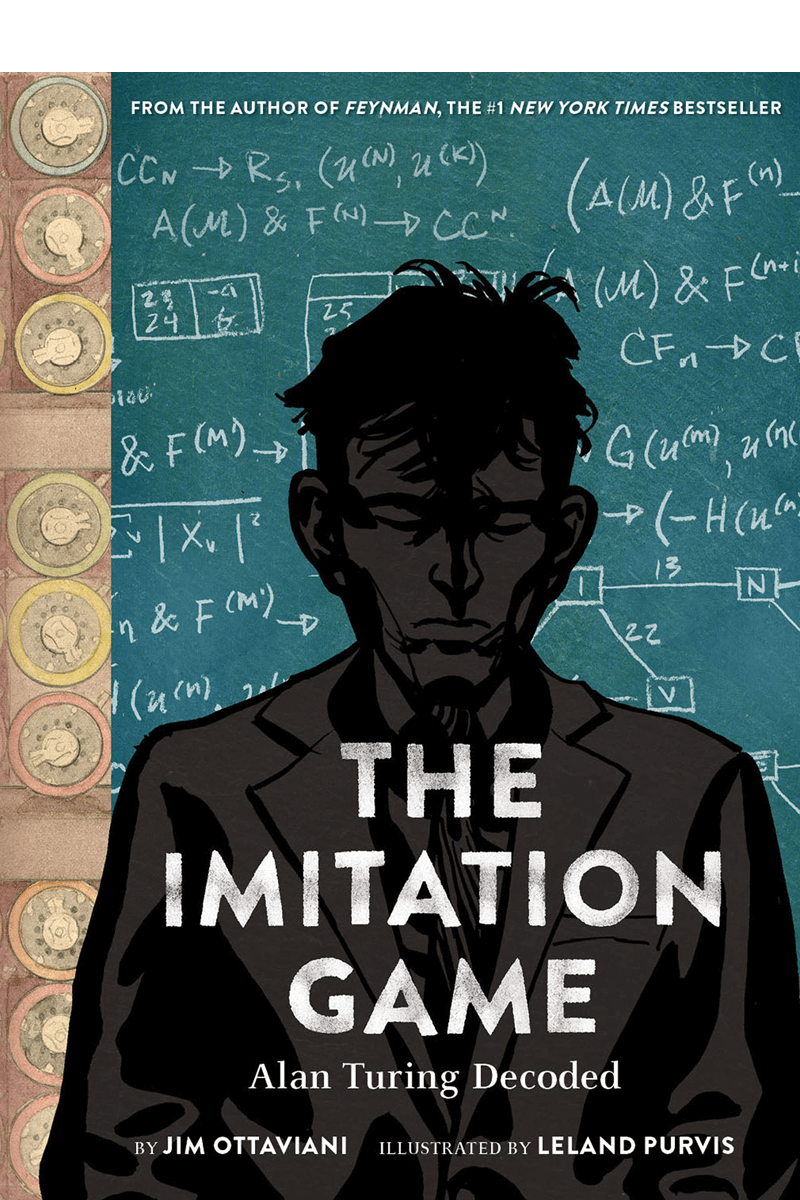 You have English mathematician and computer scientist Alan Turing to thank for whatever device you’re reading this on. And if his groundbreaking work on computing and artificial intelligence isn’t impressive enough, Turing’s code breaking efforts led to the cracking of the German Enigma during World War II…work that saved countless lives and accelerated the Allied defeat of the Nazis.

His achievements remain relevant decades after his death, fueling the computing and communication systems that define our modern world, his life in post-war Europe is, sadly, relevant in a different way: Turing was an unconventional genius who was arrested, tried, convicted, and punished for being openly gay.

This is his story.

About the storytellers: Artist Leland Purvis works in graphite and pigments on paper, using pictures to tell stories. His major works in recent years have been graphic novels, historical fiction, largely aimed at younger readers. An Eisner-Award and Ignatz nominee, he received a Xeric Grant for his self-published comics anthology, VOX, and critical acclaim for PUBO, a creator-owned limited series from Dark Horse Comics. He is the artist on several recent graphic novels, including those published by G.T. Labs (with Jim), First Second, and Aladdin.

In addition to being the author of the New York Times #1 Bestseller Feynman, all of Jim Ottaviani’s books have been nominated for multiple awards, including Eisners & ALA Popular Paperback of the Year. They also receive critical praise in publications ranging (widely!) from The New York Review of Books to The Comics Journal to Physics World to Entertainment Weekly to Discover Magazine.

I’m going places to talk about the book. Find out where and when here!

“A powerful, sympathetic portrait of one of the 20th century’s great minds…” Publishers Weekly

“It’s a beautifully told story, both for those of us with some familiarity with Turing and that historical period, and to those who are new to it…” Forbidden Planet International

“This moving, sensitive account artfully balances conveying both the life and the pioneering discoveries of a fascinating, vitally important scientist.” Booklist

“[B]eautifully told… It offers an arguably more relatable Turing than Benedict Cumberbatch’s Oscar-nommed portrayal-and does a better job of explaining his mathematical breakthroughs to the layman.” Total Film

Read an excerpt from the book. (Full color, so it’s kind of big…but worth it!)

Abrams has prepared a teaching guide (pdf) to assist you in using the book in your classroom. (Thanks to Peter
Gutierrez for his excellent work on this!) If you have suggestions for improvements or would like to share your ideas, please let us know.

T.W. asks: “I love that you highlighted the dramatic recovery of documents from U559 and Grazier’s and Fasson’s incredible sacrifice. However I was puzzled by the decision to suggest that a refurbished Enigma Machine with additional rotors was pulled off the submarine. I was remembering from my research that they recovered the book of daily rotor settings, but not an actual machine. If you have found information that suggests they also extracted a refitted enigma machine I would love to know this for sure. When I tell this story to my students (I especially love to include the information about 16 year old Tommy Brown, since they are all about his age) I would be interested in adding this information if it is correct. If it isn’t correct I’m interested in why you decided to add it as a plot point. Is it to make clear how the material recovered from the UBoat allowed Bletchley to get back to successfully using the Bombes?”

So…I know for sure I didn’t find a hitherto unknown cache of documents about U559 and what Fasson, Grazier, and Brown rescued. Looking at what I originally wrote, I did exactly as you suggested, and indulged in some artistic license because of the nature of comics…rotors are visually more compelling than waterlogged code books, and from the reference we cited for the sinking submarine scene (Enigma U-Boats: Breaking the Code by Jak P. Mallmann Howell) we know German crew sometimes failed to toss the rotors overboard, even though they were supposed to, so that’s what I suggested be delivered to Turing along with the code books. I’m still okay with that decision, but Leland also included an Enigma machine to make it more obvious that they’d gotten something important, and in retrospect I think you’re right–I should have asked for him to remove at least that…but didn’t. (I’d bet I didn’t even think to do so, in part because it’s always tough to ask an artist to re-draw–and in this case, re-paint–a panel or page, and we were always running behind schedule. So no doubt I got the finished page, thought it looked pretty good, and as a result didn’t check back with my original script to make sure we weren’t departing too much from what actually happened.) Anyway, though not a major error, it’s something that should have been in the endnotes and wasn’t. Thanks for pointing this out!