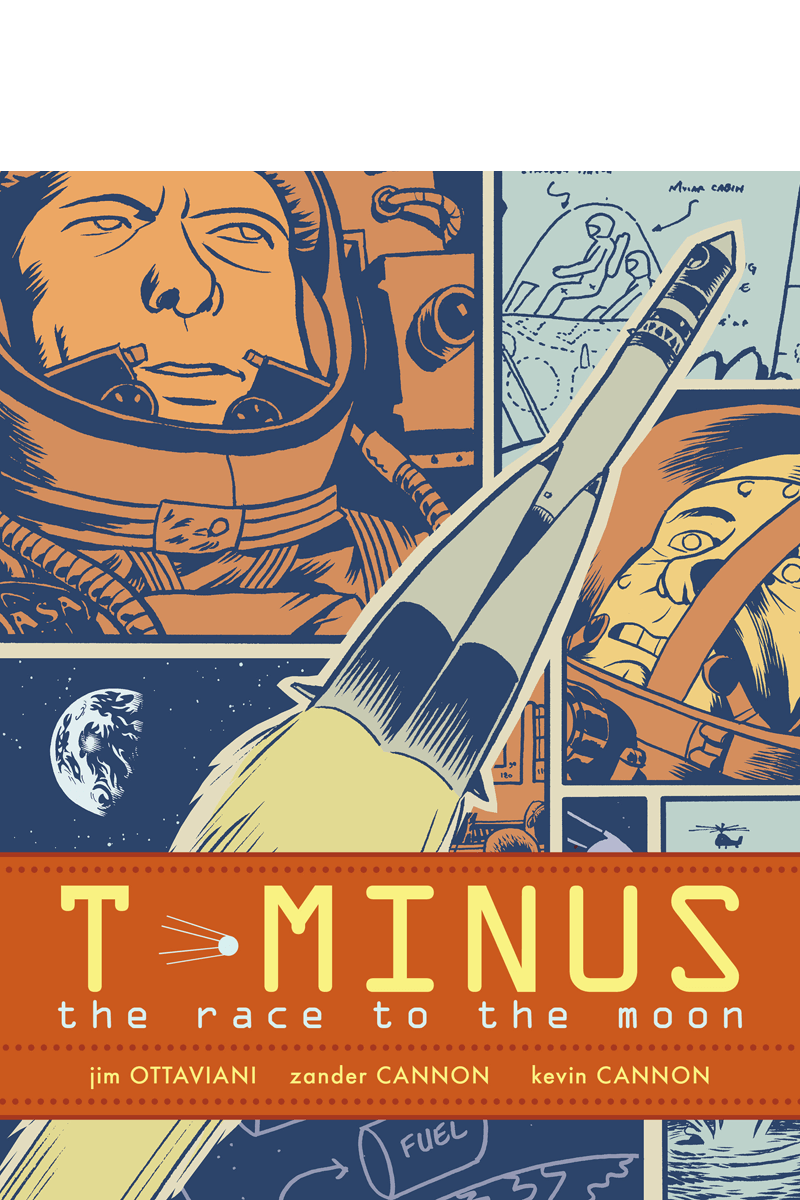 Everybody always talked about the moon, but nobody ever did anything about it.

That is, until a Frenchman named Jules Verne wrote a science fiction novel called From the Earth to the Moon in 1865 and did the math that showed how to get there, a
Russian named Konstantin Tsiolkovsky checked Verne’s figures and decided that liquid-fueled multistage rockets were the way to go, and an American named Robert Goddard started building and flying ’em.

T-Minus tells you what happens when you take two global superpowers, dozens of daring pilots, thousands of engineers and scientists, and then point them at the night sky and say “Go!?” So join the whole world as it counts down to sending the first men to the moon, and discover the story of the people who made it happen, both in the rockets and behind the scenes.

About the storytellers: Cartoonists Zander Cannon and Kevin Cannon have been together as a studio since 2004. Their work includes Bone Sharps, Cowboys, and Thunder Lizards, The Stuff of Life (Farrar, Straus, & Giroux, 2008), and Top Ten (DC Comics, 2008). They live and work in Minneapolis, Minnesota and claim to be card-carrying members of the International Cartoonist Conspiracy.

“T-Minus captures the optimism and courage of both countries’ space pioneers, making it an ideal entry point for new readers intrigued by the topic. Space know-it-alls will learn something, too.” — The New York Times

“[F]ast paced, informative… Intended for young adults, this title was incredibly satisfying to me, an adult-adult (which is as it should be).” — Cory Doctorow, via Boing Boing

Bibliography: Want to know what we read and consulted when creating the book…so you can read more yourself? Then download the full bibliography!

For teachers: We’ve prepared a study guide (pdf) to assist you in using the book in your classroom. If you have suggestions for improvements or would like to share your ideas, please let us know.

For readers: You can see an additional excerpt from T-Minus and other books from Aladdin, via their sampler. (I particularly like the looks of Delsante and Vera Martinez’s Before They Were Famous: Babe Ruth.)

Bonus Fact: Friend and science fiction expert Eric Rabkin pointed out that Frau im Mond was more than just an interesting footnote to von Braun’s career — it’s also the first place anyone used a “T-Minus 10…9…” countdown for a rocket launch. A missed opportunity by me, no doubt, and I hope to add it to the Frau glossary entry at some point!

Mistakes(!): Yes, there is (at least) one… Jack Shafer, in his excellent review in the New York Times Review of Books, noted that in the margin of page 53 I have Friendship 7 launching in 1961. We got it right with the “T-Minus 7 years, 5 months” caption on the same page, but somehow I messed up in the lower right corner. It should say “20 Feb 1962” down there. So…apologies to John Glenn! If you find others, please let me know. I’ll blush, and post it here, and try and get it corrected in future printings.