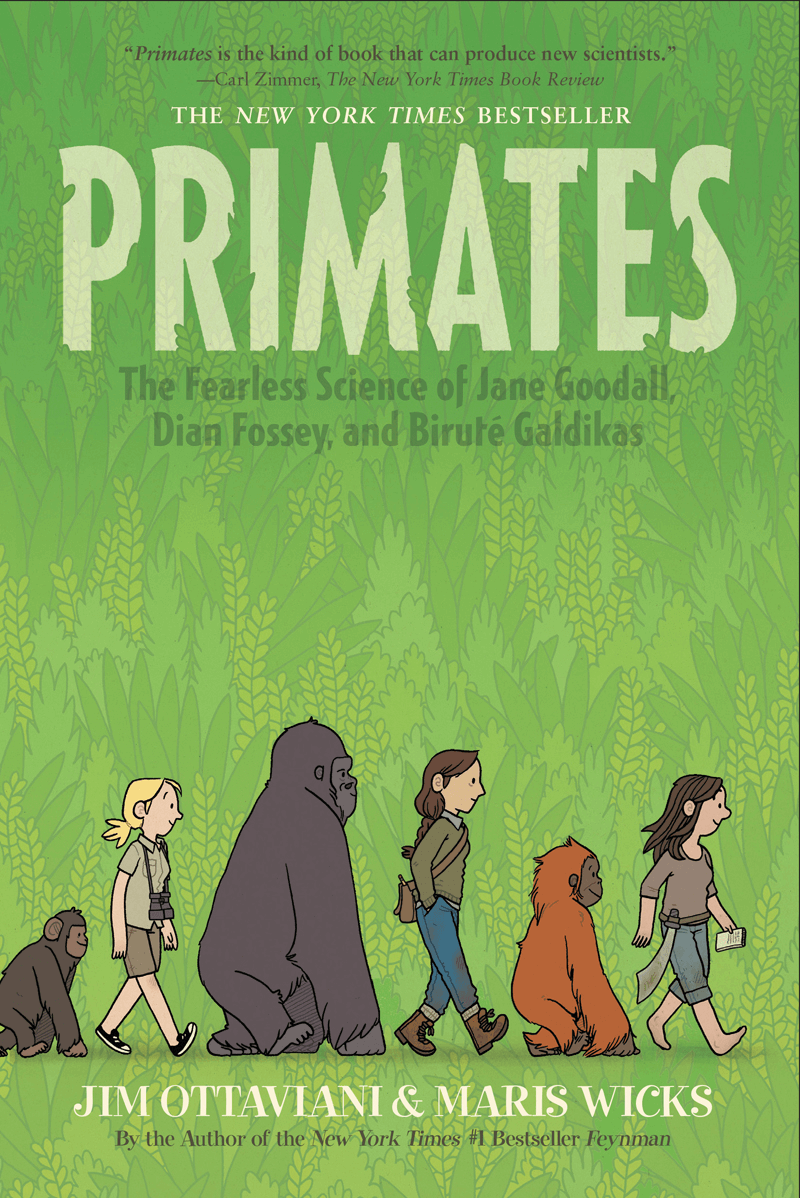 The true story of three scientists who risked their lives for research that forever changed the way we think of primates…including ourselves.

Jane Goodall discovered chimpanzees using tools — a trait once thought to be unique to humans — and is now one of the world’s foremost animal rights advocates.

Dian Fossey fiercely protected the mountain gorillas she studied, bringing the plight of these gentle great apes to the public view.

Birute Galdikas moved to the Indonesian jungle to observe the elusive animal native people called “wild person in the woods.” She stayed to rehabilitate orphaned orangutans and revolutionize rainforest conservancy.

Recruited by the great anthropologist Louis Leakey, these remarkable women are responsible for some of the biggest advances in both primatology and our understanding of what it means to be human.

About the storytellers: Cartoonist Maris Wicks = awesome. In addition to drawing comics for Adhouse Books, Tugboat Press, and Spongebob Comics, she’s a program educator for the New England Aquarium.

“Primates offers a remarkable amount of information on many different levels. The life stories may be rendered as cartoons, but the characters come across as multi-dimensional. And there is plenty of human interest…” Nature

“A riveting, jargon-free overview of one of the great stories of animal research.” Publishers Weekly in a starred review.

“Thanks to Wicks’ colorful, lively, Herge-like art, each scientist (and primate) has a distinct personality, but its the depictions of the animals — emerging from lush, leafy backgrounds or lolling in trees — that steal the show. … Presented as dedicated, iconoclastic, and profoundly in awe of the creatures around them, Goodall, Fossey, and Galdikas are inspiring figures.” Booklist

Read an excerpt from the book. (Full color, so it’s kind of big…but worth it!)

First Second and I have prepared a study guide (pdf) to assist you in using the book in your classroom. If you have suggestions for improvements or would like to share your ideas, please let us know.

Tanzania: An alert reviewer on Goodreads, and a number of others since, noted that Gombe National Park is in Tanzania, not Nigeria, as Louis says on page 11. Um…I knew that, but there it is, in print! Rats. Did Leakey make the mistake in one of the references I worked from — there is a Gombe State, and its capital is named Gombe, in northeastern Nigeria — or was it me? (Bet on me.) So…apologies for that! If you find others, please let me know. I’ll blush, and post it here, and try and get things corrected in future printings.

Translation: Not exactly a mistake, since the quote is directly from Dian Fossey, but Madeline Thaler, an MSc student in Primate Conservation at Oxford Brookes University, sent the following correction: “[O]n page 37 you translate ‘Kweli ndugu yanga’ as ‘Surely, god, these are my kin’ but what you meant to say was ‘Kweli ndugu zangu’ which means ‘Truly my siblings.’ It would be more precise to say ‘Hawa kweli ndugu wangu.’ Meaning ‘These are truly my siblings.’ If you want to add god, god is Mungu in Swahili. So it would be ‘Mungu, Hawa Kweli ndugu wangu.’ or ‘God, these are truly my kin.'” We’re probably not going to change this in the book since, again, it’s what Dr. Fossey said and her meaning and reverence for the gorillas is clear even if she (and I) mangled the Swahili. But I’m grateful for Madeline’s close reading of the book and helpful note, and glad to be able to share her knowledge. Thanks, Madeline!