Tweet
I’ve received some notes from readers of Primates, wondering how much of what they read is really what our heroes said, and whether they did what we showed them doing.
So, here’s an example of how we adapted dialogue from two letters written by Jane Goodall to her family, from the camp she called Chimpland, and how we wove parts of them into the story. You can find the originals and many more in Africa in My Blood, one of the books we recommend at the end of Primates.
Let’s start with a paragraph from a letter dated (probably? Dale Peterson, Africa in My Blood’s editor, isn’t certain) September 19, 1960. The underlined text is in the original…the italics highlight what we used:

“It’s quite cold up on the mountains at dawn, now. An icy wind sweeps over the peaks, & one longs for the clouds to be swept away from the sun. Then, at 12 when the sun is hottest, the wind stops altogether & one nearly dies of heat! I am rapidly becoming like a piece of tough brown leather. Even when I slip down a few yards of shale, I find the skin on hands, elbows, legs, etc. is not broken! It’s rather a hoot! Today is my day for doing paper work — the 1st for 2 weeks when I have not been out. It feels very strange to be staying in camp all day but there is such a lot to do.”

Now, have a look at the dialogue on page 15 of Primates… 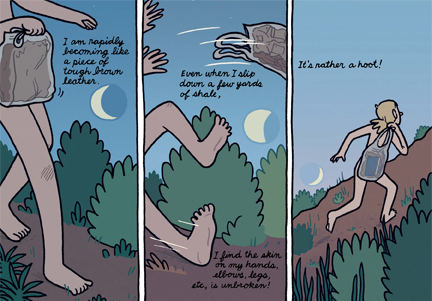 Page 15, panel 1: I am rapidly becoming like a piece of tough brown leather.

Why the changes? First, I broke sentences up and spread them across different panels to try and create a rhythm and an interplay between the words and the pictures that Maris would soon draw. We don’t want her slipping in more than one panel, and we can’t jam all those words into a single panel, either. And because space is always at a premium in comics, minor changes like going from “is not broken” (13 characters) to “is unbroken” (11 characters) get made. Over the course of a whole book, those extra characters add up!
Now, from another letter, this one dated September 25, 1960:

“Another part of my job is messing around in dung, under their nests, to see what they’ve been eating! What a life, eh! Sometimes it suddenly comes over me how strange it all is, really. Here I am, an ordinary person, with my staff of 3, a camp, unlimited funds, and doing what I have always wanted to do. Not stuck away in some horrid office, out of the sunlight, but out in the open, sleeping under the stars, climbing the mountains, watching the animals. Is it possible? Can it really be me? Or is it some strange hallucination? The only sad part is that it’s so far away from all of you.”

I broke that apart so it became… 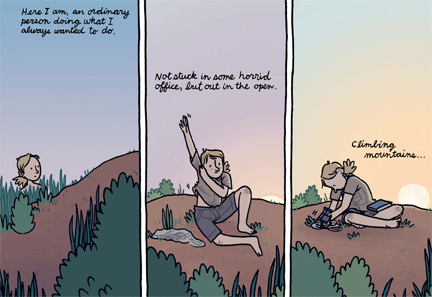 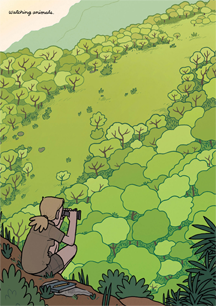 Again, pacing is important here, because I know page 16 will be a full page illustration — what comics creators call a “splash” — and we want to use the fewest possible words with the greatest possible impact there.
(Notice that on page 16 Jane doesn’t actually see any animals, but you, the reader, do see one: a human! All of a sudden you’re in Jane’s shoes; we hope that helped make you feel what she was feeling.)
On pages 17-21 we see her make her groundbreaking discovery, let her come back down off The Peak, and do some late-night writing in Chimpland. And you probably noticed that instead of removing words, I added some on page 22: “here, now?” and “…No, it’s me.” I did this to heighten the immediacy of what she’s writing. No question that it’s artistic license, but I hope you agree that it’s in the right voice, and it highlights what she’s feeling as she writes that letter. 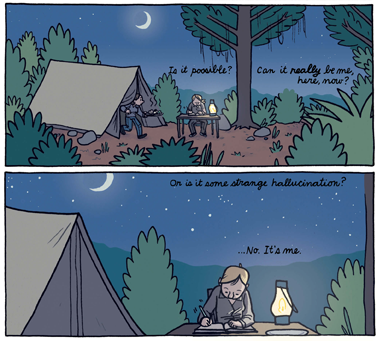 What about those pesky pages 17-21, though? Did her discovery happen between the 19th and 25th of September? No. George Schaller visited the next month, in October, and she first recorded observing tool use in her journal on November 4 of that year. So I clearly shifted things around by a couple of months.
So, is the result non-fiction? Your answer will depend on how worried you are about the late-September to early-November 1960 chronology being in exactly the right order. But I would say yes…or at least it’s 96% non-fiction (see page 24!), because it’s what happened and what she said…edited for clarity and impact.
I could go on, but you get the idea…repeat this process scene after scene for two more scientists and 133 pages and you end up with Primates!
p.s. Because you probably wondered about this too, walking the path without clothes and carrying them in a plastic (“polyethylene”) bag comes from letters postmarked February 6, 1961 and April 25, 1963.
p.p.s. An alert reader caught a very silly (and embarrassing) error on page 11, where we have Louis place the Gombe Preserve in Nigeria instead of Tanzania. Now even though there is in fact a Gombe in Nigeria, the chances of Leakey making this mistake are small. As for me, I didn’t do it to save space, because that would just be dumb…and the mistake is plenty dumb enough! We’ll try to get that fixed in a future edition.
p.p.p.s. (added September 24, 2013) Enough folks have asked “What did Biruté sit on?!” that, even though it’s in the visuals, I now think I probably should have punctuated the scene with a caption to bring it home: This comes from pages 93 and 102 of Dr. Galdikas’s book Reflections of Eden, where a forestry official (Mr. Yusuran) warns her against sitting on any log, since they burn. Biruté G. thinks he’s making a confused reference to the biblical story of the burning bush, but…no. He was being literal about the effects of the sap, and she pays for the error with “a large, black area on my behind [that] looked as though it had been burnt to a crisp, like the skin of an overtoasted marshmallow.”