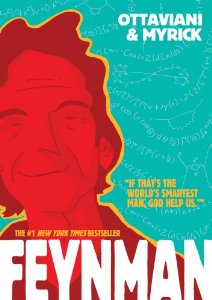 Question: What has the same great cover and interior art, but lots more blurbs and doesn’t cost as much as its first incarnation and has five fewer typos and weighs 1.2 ounces less and now has no run-on sentences?

Answer: Feynman, in paperback. It’s out tomorrow, April 30, and it’s also more bendy than the hardcover, which makes it perfect for those times when…heck, I don’t know, when you need a shin pad. You know, in an emergency?

Nobody said this was a good riddle, but all those blurbs on the back and “The #1 NYT Bestseller” bit that’s now on the front indicate it’s not just Leland and me who are happy with how the book turned out.

(p.s. I didn’t really weigh it, and I don’t think the hardcover had any run-on sentences.)