I meant to write this a few months ago, but we were in Los Angeles at the time of Ray Bradbury’s death — probably within a few miles of his home, in fact — and when I returned I got caught up in getting caught up and here it is, three months later. But Neil Armstrong’s death reminded me that another giant with respect to our ideas about space shared some of his time with me, once. Not a lot, but more than enough for me to consider myself lucky. Here’s that story.

Yeah, they don’t name ’em like they used to.

As I researched their story, I started to suspect that what I wanted to do with these two rascals (and rascals they were!) was not biography/non-fiction as much as historical fiction, bordering on telling a tale. That’s how things turned out, and the subtitle of the book, along with fine print in the opening sequence and the bold print in the endnotes, alerts readers that Bone Sharps stretched the truth here and there. We didn’t lie outright, at least not much, but there’s stuff in there that we can’t support with the historical record.

The most prominent instance of that was to insert the artist Charles R. Knight into the Cope and Marsh conflict earlier, and more frequently, than he belongs. Readers, and I, needed someone to root for and like, and Knight was the right person in the right place at the right time. To build out his character, I of course dug into published records, but somehow (and I don’t remember how!) I also got in contact with his granddaughter, Rhoda Knight Kalt. It might have been through an auction house that had recently sold a few of his paintings. Anyway, in addition to kicking off a friendship, which is always worth the effort, what I got out of meeting Rhoda was a stack of paper — Knight’s unpublished autobiography. It was not much more than a bunch of fragments, written over the course of many years and never organized into much of anything other than a box full of memories. But it was great stuff, and brought the real Knight to life in ways that couldn’t have happened otherwise.

I had to do something, so I started picking at Knight’s manuscript. Moving paragraphs from right here to after that one over there, deleting this repetitive section, researching current events and words or phrases we don’t use today. Editing. And after a few months, I called up Rhoda and said something to the effect of “I had no right to do this, but I seem to have turned your grandfather’s manuscript into a book. Would you, um, like it to be a book?”

It turned out she was delighted, and more than gave me her blessing; she asked (and here please imagine a thick New York accent) “You know, honey, Ray Harryhausen and Ray Bradbury were big fans of my grandfather’s work. If you think it would be good to have them write something for the book, I can put you in touch with them.”

Wait. Do I want their address and phone number, and an introduction? Is this a trick question?

So, in the end I contacted two legends of film and literature, respectively. Ray H. wrote something for the book right away. It was great. Ray B. was too busy, but told me that he and Ray H. had recently been on a museum panel honoring Charles Knight. I could transcribe what he said there, and we’d be all set! I think he even sent me the DVD, but maybe he directed me to someone else. Regardless, it sounded like a good plan.

Then I watched the video, and saw that it was not a good plan. Ray B. had said interesting things, but when transcribed and taken out of the conversational setting in which he said them, it didn’t read well. Certainly not Bradbury-ish. So, what to do? Well, if you’re me, first you drive your wife crazy with a boring montage of agonizing and arguing with yourself for a couple of weeks. Then you sit down with the transcription and…

Then you send it to him with a note saying you had to make a few changes to make it work in this new context and is that okay and then you wait for the response by return mail saying “Dear Jim: How dare you? You’ll never publish again, and I can make that stick. Sincerely, Ray Bradbury.”

That letter came a few weeks later, and I almost couldn’t open it. But in for a penny, in for a pound. So I did, and what it said, in bold marker, was “Splendid!” 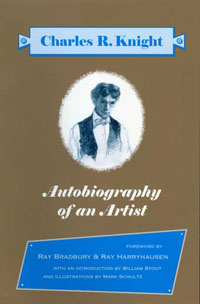 I finished the book, Autobiography of an Artist, complete with a bunch of spectacular illustrations by Mark Schultz, and got it off to the printer just in time for it to be ready by the San Diego Comic-Con that year. Hours to spare, even. And in San Diego my charmed life continued and the two Rays, Mark Schultz and Bill Stout (who kindly allowed me to use a biographical sketch he wrote about Knight and his influence as an introduction) all attended as guests. The first thing I wanted to do was get copies to everyone, since none could have seen it before and I didn’t want any of the contributors have the first copy of the book they see be in the hands of a fan who wanted it signed. You know, as opposed to from the publisher who should have gotten them complimentary copies beforehand. So, I dashed about on that first day and got to meet Ray Harryhausen in person, which was a thrill, and said hi to Bill and Mark (who I knew a little…which doesn’t make it any less thrilling, given that they’re two of the finest dinosaur artists of the current era). But, Ray Bradbury?

The problem is, even as long ago as the early years of the 21st century the San Diego show was huge, and Ray Bradbury was…himself. So, his only public appearance was for a signing up in the vast room called the Sails Pavilion. And I’m down below, literally and figuratively, in the small press area and I can only break free from my booth (okay, 3’x6′ table) for a few minutes. So I get up there and the line to get something signed by Ray B. is longer than every line at every Disney ride in every country, past and future. Impossible. And to drive that point home, a woman is walking the perimeter holding tablets of stone from which she is reading, no, shouting, the rules of engagement.

Okay, that soul thing is made up, as is the business about the tablets — she didn’t need ’em; she had this all memorized — and maybe he insisted on personalizing things. (Hello, eBay.) But there were rules and there were many of them and this was serious business and I was sunk. When she got to my position in line, which was not in fact in line, I interrupted the delivery of the commandments and showed her the book. I told her that I had published it, that Ray had contributed to it, and I wanted to make sure he got a copy of his own before someone presented one for him to sign. She looked at me like I was another fan (true) desperate to meet him (not untrue) and like I was crazy (true enough, in context) and took the book and went back down the line. “Ray will only sign one book each. He will not personalize…”

I waited until I saw her disappear behind the crowd, then I shrugged my shoulders, told myself I’d done what I could, and began walking away.

Just as I was about to leave the area — I remember being about to push open the door to leave the pavilion, but that can’t be true; I would have been too far away to hear anything at all — I heard someone come up behind me fast and yell “Hey. Wait a minute.”

I turn around and it’s Moses herself, and she says

And with that I sauntered, slunk, and strode all the way around that densely packed and accusing line, getting the hairy eyeball from the multitude.

The rest is the usual; we meet, shake hands (hah!), he thanks me for putting out the book, I thank him for contributing to it, and yes, I get his signature on my own copy. On the cover, of course.

It was brief and wonderful, and I can’t remember anything he said, specifically. But “He will see you”? I remember that. It’s like he was a king. Which he was; a king from Earth, Mars, Past, and Future.