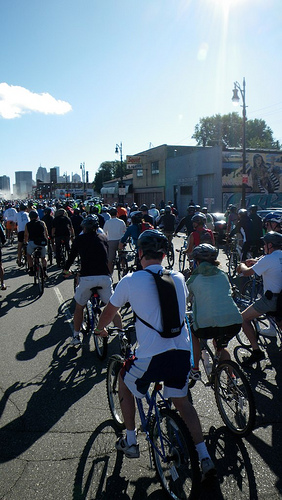 Apparently the amazing David Byrne took part in Tour de Troit this past weekend; his first, our fourth. When we started riding it in 2006 there were 300 other people cruising the ruined splendor of Motown on bikes. Now the event is capped at ~3000 and a Talking Head, and it remains an amazing ride (the course changes every year) through a once grand and still impressive city.

Byrne’s diary entry called “Don’t Forget the Motor City” touches on the Tour and much more, so I’ll stop here so you can go read it. As our pal Phil said, if his photos of the Michigan Theater don’t break your heart, nothing will.

(Credits: Our pal Kris took this picture last year. We weren’t sure she and Phil enjoyed it, since it seemed more crowded and slow in 2009 and they’re real cyclists, but they came out again this year!)