This has been a rough year for running, for me. Decades of pounding my flat feet flatter caught up with me in February — it’s interesting how things can change almost overnight. Interesting in the “why can’t I walk without wincing?” way, at least. So I now wear motion control running shoes and hard plastic inserts that force about a 1.5cm arch into my soles. I also had to get rid of almost all my other shoes and switch to ones you can’t torque. After 30-odd years of running I’ve found adjusting to these things hard, and it’s gotten me thinking about age and running shoes I’ve loved over the years.

There haven’t been many, but looking back at them now is fun. I can’t decide whether shoes have gotten incrementally or exponentially uglier over the years, for one thing. De gustibus non est disputandum and your mileage may vary and all that, but for me, I want art deco, but the only choices out there are art nouveau. So here’s what I wear now, not entirely by choice: 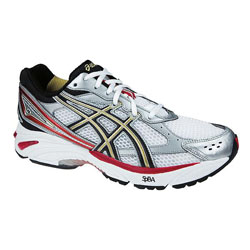 I’ve finally begun to like the way the Asics Gel Foundation
feels in the last few weeks, as my second pair is getting fully broken in. These miracles of engineering couldn’t protect me from a sprained ankle, though. Where’s that technology when you need it on the Crooked Lake Trail? I won’t stock up on them, in other words.

Moving backwards in time, here’s the first shoe I bought multiple pairs of when I found it was going out of production:

I figured you couldn’t get enough of the Nike Vengeance, but as I cracked open my third and last box in 1990 or so, I realized that the world had probably passed it by and that I could do better. And it had.

But if I could still be wearing these…?

…well, I’d have never found out and I’d be running sub-4 minute miles and I’d still be wearing them and never mind what the podiatrist said. That’s the Brooks John Walker RT-1 there, ladies and gentlemen, and it was magic. It’s the first shoe I fell in love with, the shoe I lettered in, the shoe that John Walker himself designed and wore, the shoe featuring Brooks Special Open Mesh Nylon and the Varus Wedge™, and a shoe only available for about a year, maybe two. I laced on my first pair towards the tail end of that second year and when I wore them out and wanted to purchase another and they were not available I was crushed like a gardenia.

(That metaphor is dedicated to the people who read this blog to hear about comics.)

I doubt the RT-1 was much lighter than what I wear now, and what I wear now is heavy compared to shoes designed for 17 year-olds with, you know, arches. But I like to think that somewhere out there, maybe within shouting distance of Plato’s Cave, Pheidippides is lacing on a pair of these ideal shoes and limbering up for a training run.

See you all at Dances With Dirt!